Hermann (Arminius), a Cheruscan chieftain, spearheaded the struggle to defend German tribes against a Roman imperial army. In time the Hermann story became a legend and Hermann a symbol of strength and unity in preserving freedom.

The story of the Roman legions' first major defeat unfolds in the forests of north-central Europe at the time of Christ. In the autumn of the year 9 C.E., a coalition of German tribes under Hermann ambushed three Roman legions commanded by Qunctilius Varus. The defeat caused Caesar Augustus and his successors to forego conquering Central Europe. A new imperial policy changed European history. The people of Central Europe developed independent of Roman Rule.

Today, on Grotenberg Mountain, a high hill near the German city of Detmold, a colossal statue of Hermann memorializes the event. A similar but unique monument in New Ulm, Minnesota, has come to represent the contributions of Americans of German heritage, the largest ethnic group to emigrate from Europe to the United States.

Hermann on the Prairie

The Hermann Monument in New Ulm is an unexpected outcome of European migration to America. In the 1840s German-speaking peoples from Central Europe were immigrating in droves to the United States. But in many places anti-immigration resentment resulted in street riots. In response, the new immigrants sought a symbol to unite them. They chose Hermann, a legendary German folk hero, and formed the Order of the Sons of Hermann as a rallying point throughout the United States.

The New Ulm chapter was led by Julius Berndt, the national secretary of the Sons of Hermann organization. Because of Berndt's vision, leadership, energy, determination, and direction the Hermann Monument was erected in New Ulm in 1897 on the prairie land of Minnesota. It was patterned after the massive Hermann Monument in Detmold, Germany.

When the local chapter of the Sons of Hermann disbanded after World War I, the City of New Ulm took over the care and ownership of the monument. In 1973, the Hermann Monument was placed on the National Register of Historic Places. And in 2000, the monument received national and international recognition: The 106th Congress of the United States designated the Hermann Monument to be an official symbol for the contributions of Americans of German heritage. 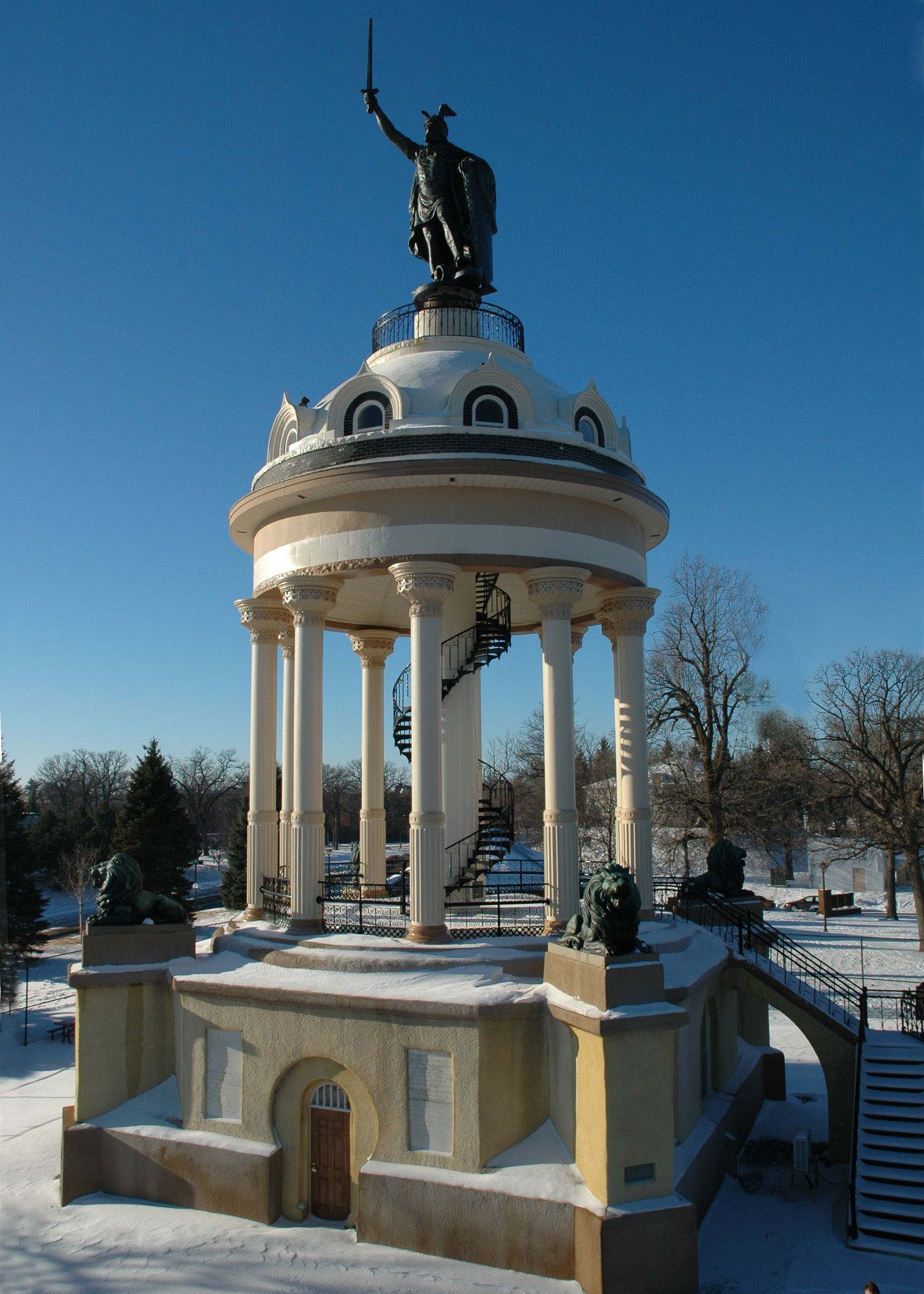 Compared with statues of similar size and material composition, the Hermann Monument is second only to the Statue of Liberty. Lady Liberty in the harbor with torch upraised welcomes the huddled masses of immigrants to the land of liberty. "Hermann on the Prairie" with sword uplifted reveals a simple truth of democracy: Eternal vigilance is the price of liberty.

Resolved by the House of Representatives (the Senate concurring), that the Hermann Monument and Hermann Heights Park in New Ulm, Minnesota are recognized by the Congress to be a national symbol for the contributions of Americans of German heritage. The monument is on the National Register of Historic Places.

The City of New Ulm completed the refurbishing of Hermann Monument. Lead base paint was removed and the monument base was repainted. Cost of the project was approximately $800,000.

The original design of the monument by Julius Berndt included lions on the four pedestals at the corners of the base, but a shortage of money in 1897 left these pedestals without their lions. After the centennial of the cornerstone laying, in 1988, it was decided that the monument should be completed as originally planned.

Four classic design cast iron lions were shipped from China and painted to match the patina color of Hermann. The artist performed a magnificent match and, truly, the four lions appear to have been in place all of these 104 years. Their stately, regal appearance truly enhanced the overall monument when they were placed on the pedestals on September 25, 2001, the 104th anniversary of the formal dedication of the monument.