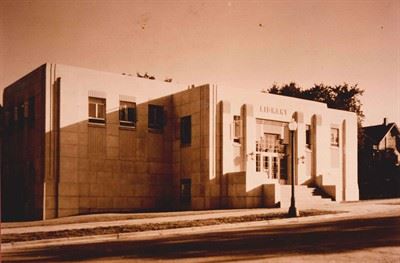 New Ulm's earliest citizenry organized a small library consisting mostly of German classics in Turner Hall, which was the main center of social activity in the young community. That collection fell into disuse however, and some local readers decided that New Ulm needed more.

In 1893, some people set up a collection of 398 volumes and took turns opening the collection for the public, but when the citizenry was asked to support this library in the 1900 election, the project was voted down. The meager library was closed.

In 1930, a prominent citizen, N Henningsen died and donated a parcel of land to be used to build a library. His heirs added the stipulation that the building must be started within five years or the land would revert back to them to use for whatever they chose. Through the gallant efforts of two concerned readers, Fred W Johnson; the namesake of Johnson Park, and Adolph G. Meile, the administrator of the Henningsen estate, the groundbreaking ceremony for the new building materialized on October 14, 1935. The new library and historical museum opened February 15, 1937.

Early in the 1950's the County assumed responsibility for the historical museum and it became administratively separate from the Library. Soon thereafter the Library Board realized that more space was needed and began work on expanding the capacity of the existing structure.

In January 1965, plans were announced for an addition to be built on to the original building. The original facility, which was built to house 24,000 books was already holding 32,000 books and donations of historical artifacts were being turned down by the historical museum because of lack of room.

In 1974, a design for a new, separate facility was accepted by the City Council and contracts were let for construction of the new building on land previously acquired from the Henningsen and Somsen families, adjacent to the former library and museum. The architect on this project was Gene Flynn, and construction was completed by Heymann Construction of New Ulm.

On February 12, 1976, the present library was officially dedicated. Walter Mondale, at that time a U.S. Senator from Minnesota, was the featured speaker at the dedication ceremony. The new structure contained 22,000 square feet of floor space and was built at a cost of $1.2 million. Financing for the project came from the City Building Fund and from Federal Revenue Sharing monies.